Knock on the Coffin Lid is a roguelike game. The game combines interesting and thoughtful dialogues with RPG elements. RedBoon Studios – independent indie developers have brought Knock on the Coffin Lid to life. The essence of the game is that you walk on a schematic map, encountering random events and characters. At the end of the road, you’re faced with a boss that makes it so easy to kill you. By 2022, the developers have made a lot of updates, improving the game. You will have to participate in a lot of different game events, and collect and improve your deck of cards for more effective fighting. As the game is in the roguelike genre, you will have to start the game from the beginning quite often.

Knock on the Coffin Lid introduces you to your first character named Percival. You meet Mortis, the suspicious hero, who resurrects you. Remember that when you die, you will return to the start of the game as if nothing ever happened. All the items you’ve earned will disappear, and opponents you’ve already defeated will be waiting for you again. The more we play, though, the more starting bonuses we get and the more powerful our character becomes at the beginning of the game.

Since we have three boxes for local talents, we can generate quite different starting characters, and the overall game strategy will change as a result. At the beginning of Knock on the Coffin Lid, we see a map with four possible directions. The map type is the same, and the events in the map are randomly generated. In addition to the standard fights, there are quest events – with options. Which option should be selected? The answer is not always easy to see. You’ll have to think about it. In each act of the game a different choice of quests, in addition to battles and quests, we can come to the merchant. The merchant can buy the necessary things and sell what we do not use. Also on the map, you can find a chest, which is always a good amount of gold and artifacts. You must visit a local idol from which you can update your deck of cards in several ways. Go to the fire to restore health and rest. 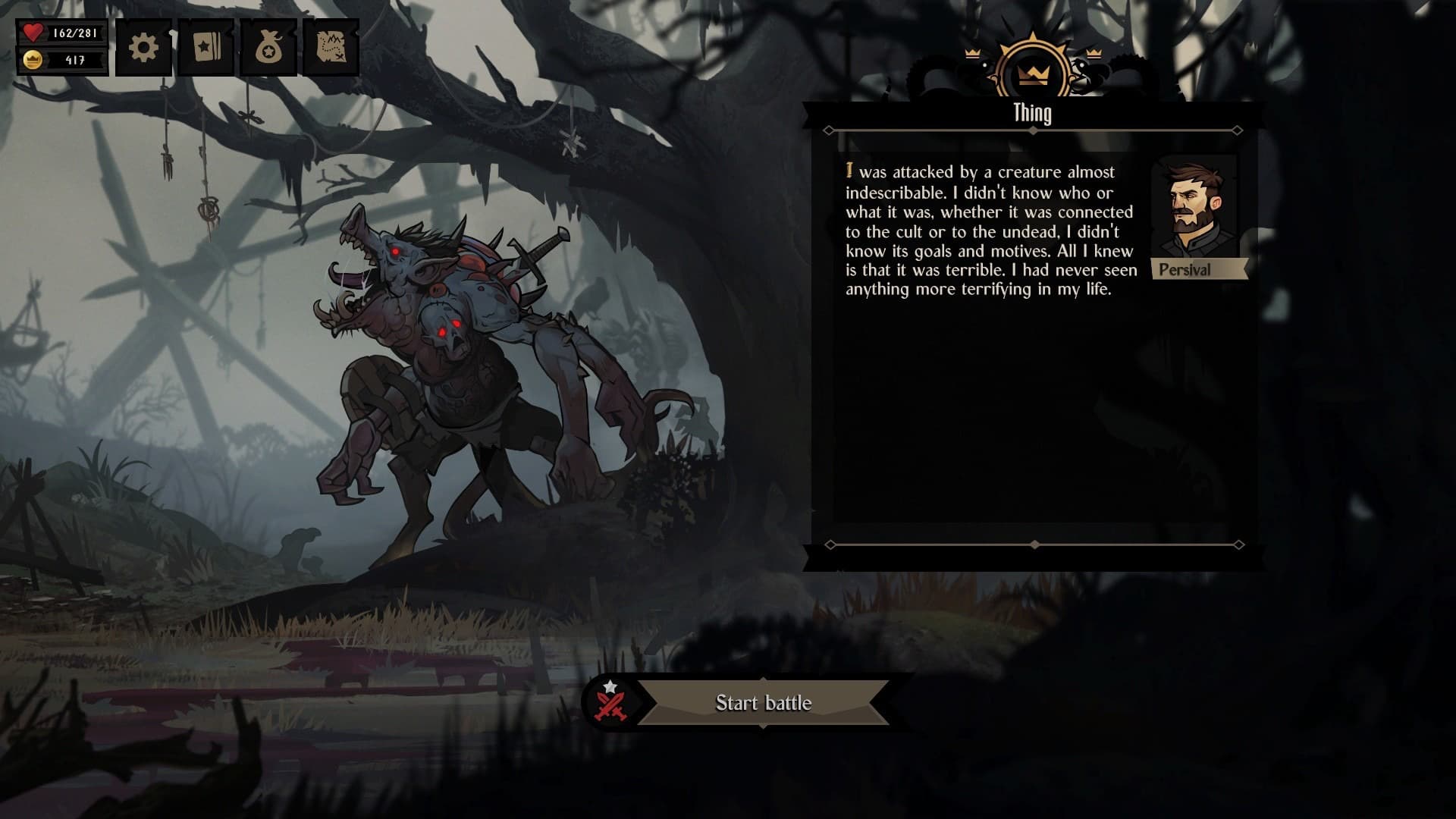 Now let’s talk about the deck of cards and card battles.

At the beginning of K.O.T.C.L. , we have 12 cards – for attack and defense. In each round of the fight, we get five random cards that we can play, depending on our energy. The played and unplayed cards in a round are discarded. And once you’ve played your entire deck of cards, the cards from the discard are returned to you. Each time this process begins anew. As Knock on the Coffin Lid progresses, we get new cards into the deck, with the option to discard them. You choose which cards you want. This feature allows us to create strong and effective combinations. And resting by the fire, we can strengthen our deck, remove unnecessary cards and improve those that we are going to play in the future. Some cards have several options for improvement. For example, the attacking card, we can improve for damage. 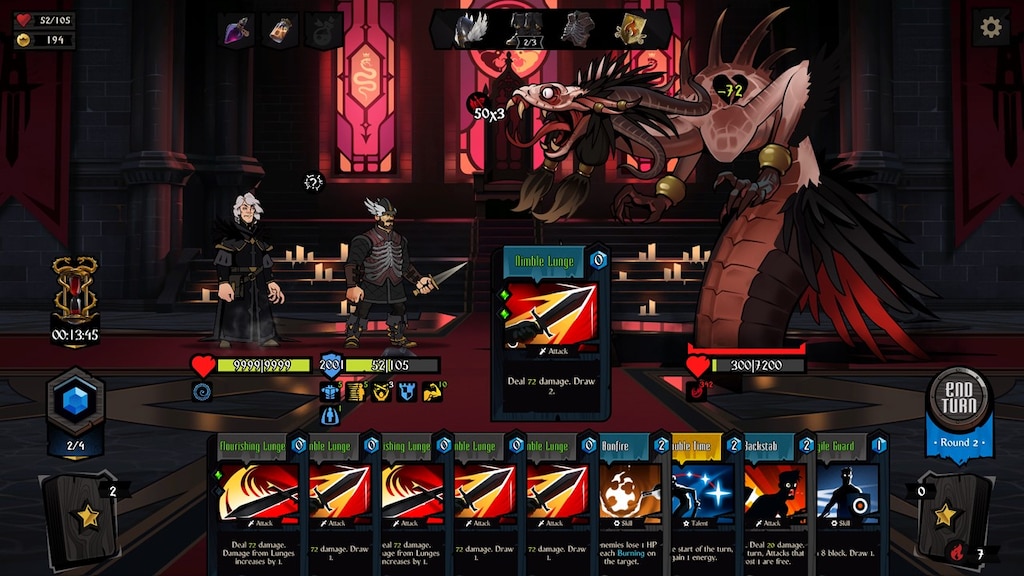 By default, the health of our hero between battles is not restored, in consequence of which it is necessary to plan the attacking and defensive actions. Health can be restored in several ways. The easiest way is to go to the end of the act. At the beginning of the new act, you will have full health. Health is restored by potions, some quests, and things. But it’s not so effective. In addition to the great variation of deck manipulation, we can change the characteristics of our hero with items. Things come in different qualities and of different usefulness. Properly chosen items can strengthen your deck of cards and the effectiveness of the fight.

Another nice thing about K.O.T.C.L. is the presence of sets in the equipment mechanics. Collecting a set is not too difficult, it is given as a reward for battles, and set items can also be bought from merchants. Try to plan your route to visit at least one merchant per act. Merchants can remove cards that you don’t need for gold. But more than one removal from each merchant is not an easy thing to do. So the cost of each card will increase. This is also worth thinking about.

In addition to equipment, you can give our hero various elixirs. One of the many potions is the Elixir of Indefatigability. This elixir reduces the cost of cards in your hand until the end of the fight, which is very useful against bosses and strong opponents.

If you are a fan of games like Darkest Dungeon, if you like hardcore and support indie developers, you should add this game to your wish list.

Knock on the Coffin Lid will easily draw you into its interesting world. The game delights with interesting dialogues, thought-out mechanics, atmospheric visuals, and music. RedBoon Studios has worked hard to create a fresh roguelike game, to bring in a bit of love and fear. Be prepared to fight for your character’s life, combat all difficulties and make difficult decisions. The way in the game K.O.T.C.L. is not easy, but definitely worth the emotions received. Join the game Knock on the Coffin Lid, sure you’ll love it.