The TomTom Go Essential is a great satnav – but if you have a smartphone, why not use an app?

What is the TomTom Go Essential?

The Go Essential is TomTom’s mid-range satnav. Available either with a 6-inch screen or as the 5-inch model reviewed here, it packs plenty of features including Wi-Fi updating, lifetime traffic services and lifetime European map updates. In addition, you get hands-free support for your smartphone.

Costing around £30 more than the similar Go Basic, the Go Essential adds six months of speed camera updates (rather than three), hands-free calling, and compatibility with Siri and Google Now. It’s considerably cheaper than the range-topping Go 5200, but lacks world mapping, lifetime speed camera updates, and traffic updates over a built-in SIM.

The Go Essential comes with a USB cable, a separate single-port 12v (cigar lighter) adapter, and a screen mount. The cable fits into the “active magnetic” mount, so once that’s on your windscreen you can simply snap the satnav in and out of the car. There’s a USB port on the device itself if you need it, but it’s covered when placed in the mount. 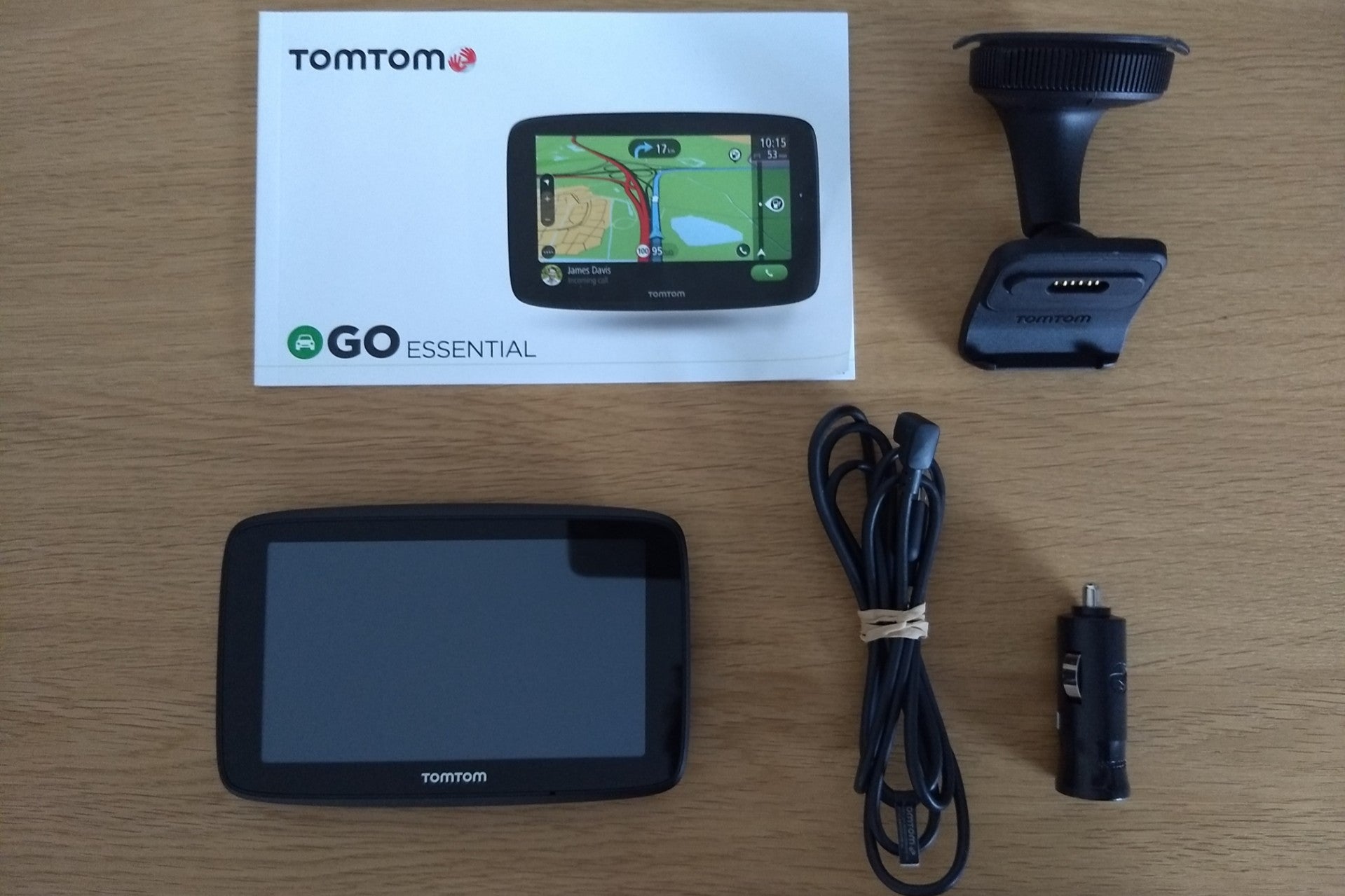 Before heading out you’ll need to set up your satnav. Connect it to a USB charger (not supplied) and it will switch on and a wizard will walk you through connection to your wireless network, then to your smartphone via Bluetooth. If you don’t already have a TomTom account then you’ll be prompted to set one up.

Once the wizard is done, it’s time for software and map updates – which in our case totalled 9.2GB. While that sounds like a lot, on our city-centre fibre broadband they completed in 38 minutes. 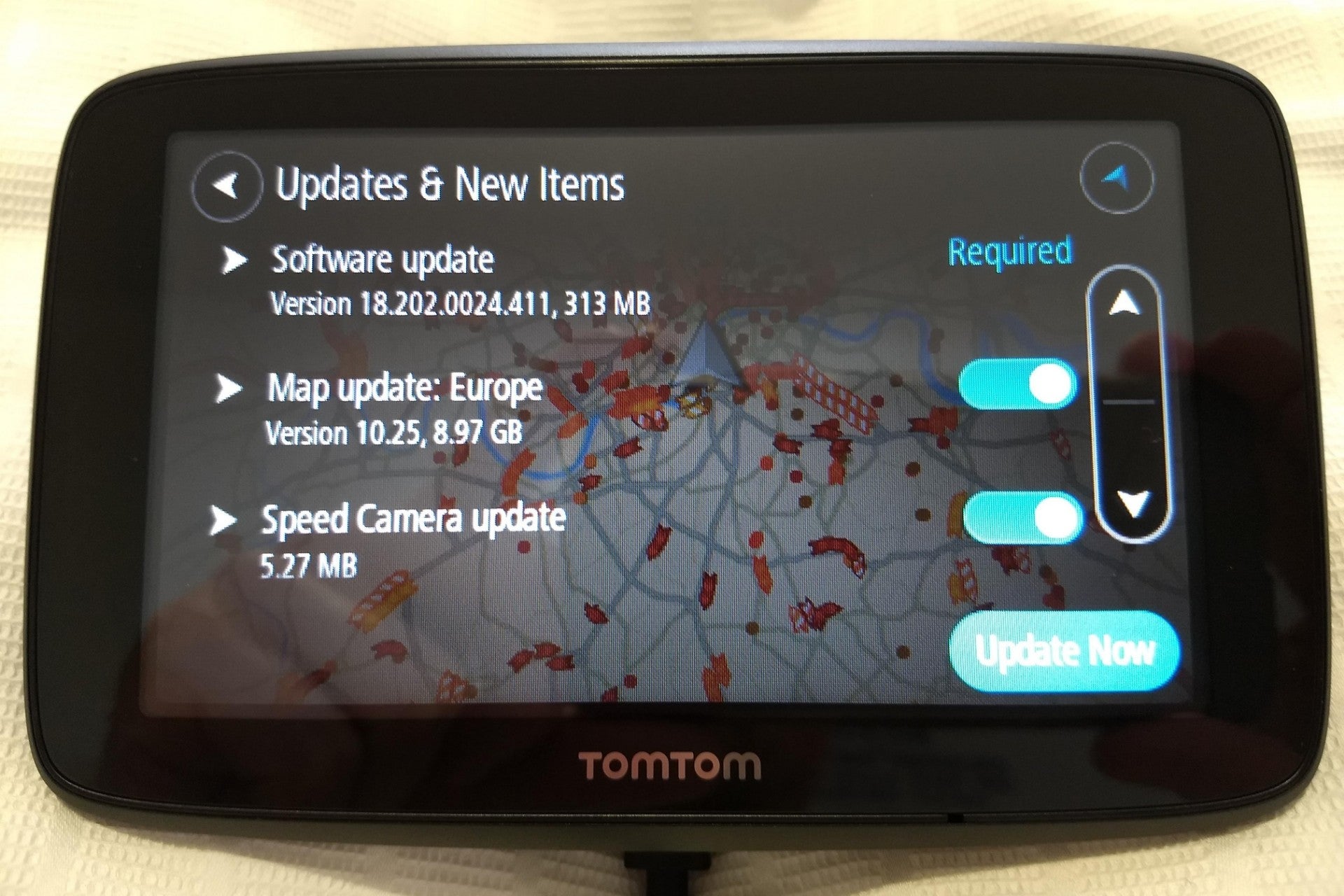 The fact that there isn’t any PC software to worry about is great. However, to get the most from this satnav you’ll need to install TomTom’s MyDrive app onto your Apple or Android smartphone.

The app offers some decent features, letting you search for destinations and send them to your satnav ahead of time. You can use it to plan routes, set up road trips from the TomTom community, or quickly find your contacts’ addresses. 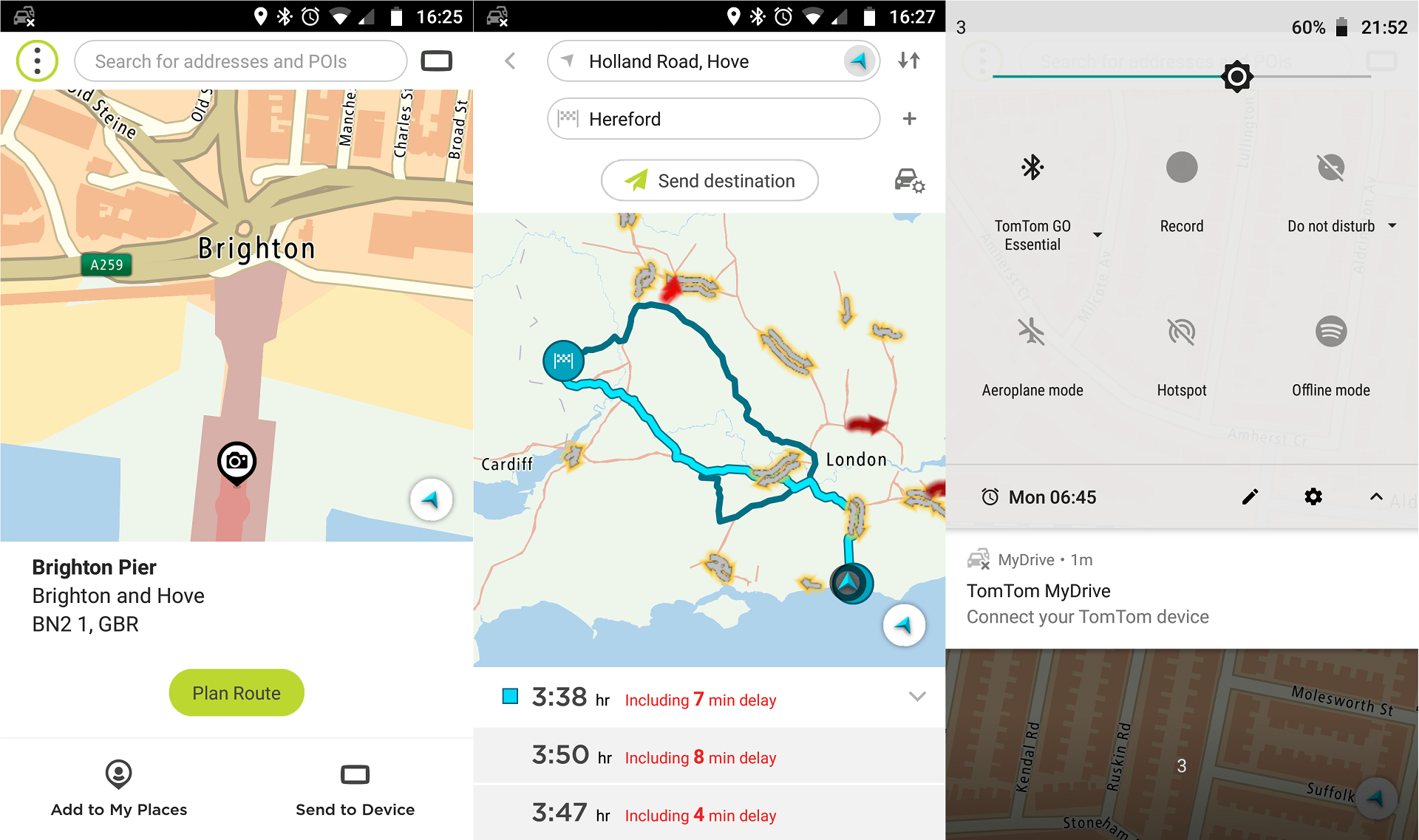 While map and speed camera updates are handled over Wi-Fi, the Go Essential has no built-in SIM card, so it’s dependent on a linked smartphone running MyDrive for traffic updates.

In practice, I found this troublesome. At times, the phone and satnav seemed reluctant to connect without manual intervention. At other times, there was no MyDrive or traffic service availability, despite a Bluetooth connection and a data signal on the phone.

There’s no warning of this on the main screen except in the route bar, which appears only after you’ve set a destination. I completed most of one journey thinking I had live traffic information, when I didn’t. 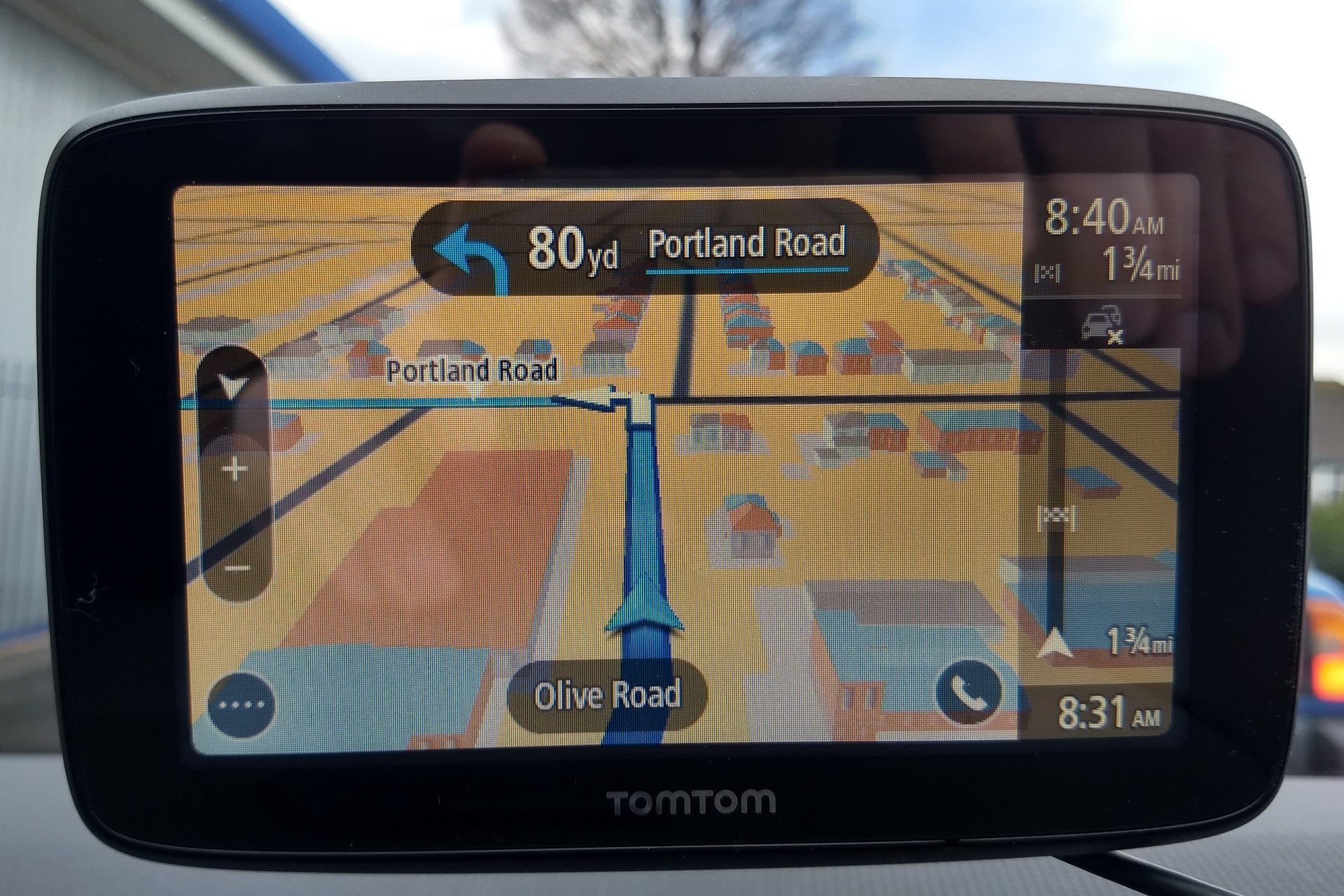 The Go Essential’s main display is bright and impressively uncluttered. With no route set there’s a simple 2D map with a location marker, zoom bar and the menu button. Open the latter and there are four icons to a page, big enough to stab at with even clumsy fingers.

The destination search is brilliant. Gone are the days of laboriously typing in city, street and number, replaced by an intuitive search that matches partial results to candidate addresses, prioritising the nearest. It’s best to add your regular stops to My Places so they’re easier to select, but TomTom says the Go Essential will suggest places once it learns regular stops. As with previous reviews of satnavs with this feature, it seemed I didn’t do enough driving for this to work.

The screen isn’t as crisp as a smartphone’s, but it’s extremely responsive to touch, drag and pinch gestures, without being over-sensitive. You can enter Settings to customise the appearance, turn off the rather annoying touch beep, or edit warning sounds and options. I soon switched most of the speed camera warnings from the default “Always” to “Only when speeding” – which resulted in far fewer distracting beeps.

By default, the view during navigation switches to full-screen 3D, with the next turn overlayed at the top, and a translucent route bar to the right. This shows the journey start and finish times, along with any restrictions, traffic or accidents on the way. Any likely delay is shown at the top of the bar, along with the ETA. On motorways, junction layouts are previewed clearly in the right-hand third of the screen – pay attention, and it’s almost impossible to be in the wrong lane. If you’re used to an old satnav model then you’ll be impressed by how quickly the Go Essential finds a route. It took just 14 seconds to plot a 189-mile journey from Brighton to Hereford. Miss a turning and there’s no admonishment; it simply recalculates, seeming quite prepared to defer to local knowledge if you head off in an entirely different direction.

The traffic information seems up to date – but, although text on the box promises “a priority lane”, in practice it’s best to remember there are limitations. There’s a lag between, say, a breakdown happening five miles ahead and traffic services becoming aware, by which point you might have passed the last junction that could have avoided it. I also noticed confusing information during a long-standing stretch of motorway roadworks. While the route bar correctly displayed a 50mph limit, the main screen showed our current speed against a 70mph limit that hadn’t applied for months. 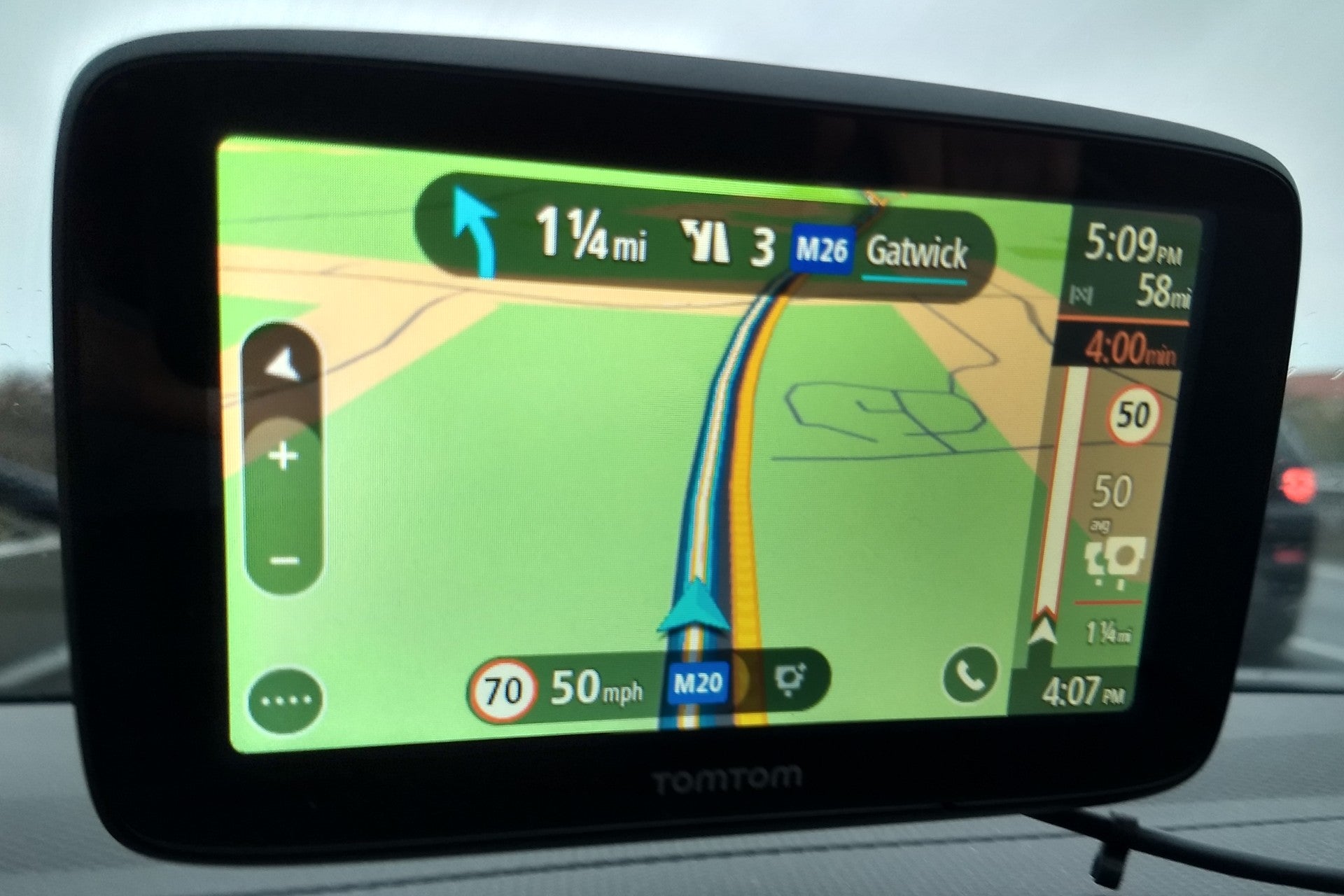 Most other frustrations were minor. To adjust the volume of a hands-free call you have to enter the menu – a simple on-screen control during a call would have been better. The screen would also benefit from automatic brightness, rather than its distinct, adjustable day/night settings. As I drove into a dark and heavy daytime storm, Go Essential became far too bright, necessitating a dangerous trip into the Settings menu.

Why buy the TomTom Go Essential?

For the most part, this is a great satnav, finding good routes quickly, displaying them clearly and updating them with live data as you go. It’s generally easy to use, and offers quite decent value given its features. That said, if you can live without its magnetic mount and hands-free calling, you’ll save £30 by opting for the Go Basic.

In truth, both the Go Basic and Go Essential leave us puzzled. If you don’t have a smartphone, you’ll need a satnav with built-in traffic updates – such as the £300 TomTom Go 5200. If you do have a smartphone then you could buy a car mount and use free apps such as Waze, Apple Maps or Google Maps to navigate. Unless they come up short, I can’t see a compelling reason to invest £179 in a satnav – even one as good as this.

3 Ways to Make Sure It Fails

3 Ways to Make Sure It Fails